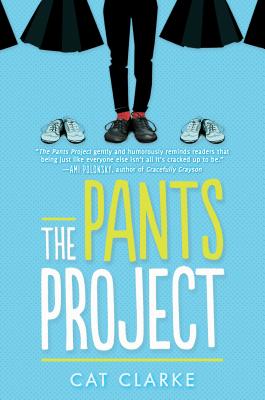 By Cat Clarke
$16.99
Currently not in store. Available to order. Usually Ships in 1-5 Days

Liv is annoyed with the school's very traditional and very gendered dress code. Liv feels much more comfortable in pants and is unclear why it is necessary for half the school to wear skirts. Liv begins the campaign because of personal discomfort, but soon learns that other students at the school are equally uncomfortable with the dress code, and each for different reasons. Fans of George will love this pre-transition story. Middle school readers will appreciate the subtleties of gender and sexuality that begin to emerge in middle school.

A touching, humorous story of strong-willed eleven-year-old Liv, who is determined to challenge his school's terrible dress code and change his life. Inspire empathy and compassion (and a few laughs ) in young readers with this stunning middle-grade novel.

"My name is Liv (Not Olivia)... I'm not technically a girl. I'm transgender. Which is a bit like being a Transformer. Only not quite as cool because I probably won't get to save the world one day."

Liv knows he was always meant to be a boy, but with his new school's terrible dress code, he can't even wear pants. Only skirts.