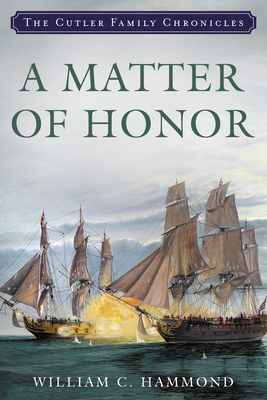 This is book number 1 in the Cutler Family Chronicles series.

The first volume in a series of maritime novels set in the early years of the United States, A Matter of Honor is a dramatic account of a young man's coming of age during the American Revolution. Introducing Richard Cutler, a Massachusetts teenager with strong family ties to England, the novel tells his story as he ships out with John Paul Jones to avenge the death of his beloved brother Will, impressed by the Royal Navy and flogged to death for striking an officer. On the high seas, in England and in France, on the sugar islands of the Caribbean, and on the battlefield of Yorktown, Cutler proves his mettle and wins the love⁠-and allegiance to the infant republic⁠-of a beautiful English aristocrat from the arms of Horatio Nelson himself.

William C. Hammond was born in 1947 in Boston, Massachusetts and grew up in Manchester-by-the-Sea, Massachusetts. An amateur historian and sailing enthusiast, he is the author of the Cutler Family Chronicles set during the American Revolution. Hammond lives in New Zealand with his wife Sheree.