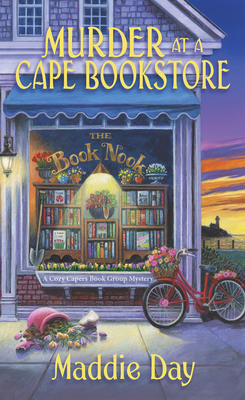 This is book number 5 in the A Cozy Capers Book Group Mystery series.

In Agatha Award and Macavity Award-winning author Maddie Day’s fifth cozy Capers Book Club Mystery, it’s mud season in Cape Cod, and when an ill wind blows in a murder with a twist in the tale, bicycle shop owner Mackenzie “Mac” Almeida and her crime-solving book group are ready to leaf through the clues . . .

Everyone loves a festival, though Mac has a few concerns about the Spring equinox event organized by the new Chamber of Commerce director, Wagner Lavoie. After all, March weather is unpredictable. Still, there’s plenty to enjoy, between flower-shaped candies at Salty Taffy’s, spring rolls at the Rusty Anchor, and a parade of decorated bicycles. But the festivities soon take a stormy turn . . .

Mac glimpses conflict between Wagner and other locals during the festival, but it’s a shock when he’s found dead in the Book Nook, pinned beneath a toppled bookshelf. It’s an irresistible case for Mac’s book group. She and the rest of the Cozy Capers will have to use all their sleuthing skills to bring the killer’s story to an end . . .
Maddie Day is the Agatha Award-winning author of the Cozy Capers Book Club Mysteries, the Country Store Mysteries, the CeCe Barton Mysteries, and the Local Foods Mysteries, as well as other series and short crime fiction written under the name Edith Maxwell. A member of Mystery Writers of America and a proud lifetime member of Sisters in Crime, she is a regular contributor at Mystery Lovers' Kitchen and belongs to the Wicked Authors, a group of bestselling authors who blog at WickedAuthors.com. Day lives with her beau and their cat Martin north of Boston, although she knows Indiana, California, and Cape Cod intimately. She is a wine enthusiast, talented amateur chef, and former farmer and can be found online at MaddieDayAuthor.com.