Empire of Water: An Environmental and Political History of the New York City Water Supply (Paperback) 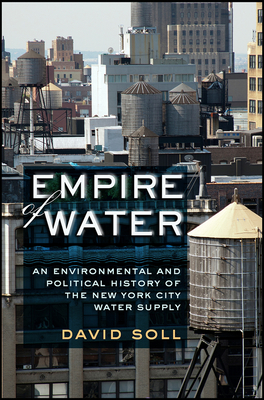 Supplying water to millions is not simply an engineering and logistical challenge. As David Soll shows in his finely observed history of the nation's largest municipal water system, the task of providing water to New Yorkers transformed the natural and built environment of the city, its suburbs, and distant rural watersheds. Almost as soon as New York City completed its first municipal water system in 1842, it began to expand the network, eventually reaching far into the Catskill Mountains, more than one hundred miles from the city. Empire of Water explores the history of New York City's water system from the late nineteenth century to the early twenty-first century, focusing on the geographical, environmental, and political repercussions of the city's search for more water.

Soll vividly recounts the profound environmental implications for both city and countryside. Some of the region's most prominent landmarks, such as the High Bridge across the Harlem River, Central Park's Great Lawn, and the Ashokan Reservoir in Ulster County, have their origins in the city's water system. By tracing the evolution of the city's water conservation efforts and watershed management regime, Soll reveals the tremendous shifts in environmental practices and consciousness that occurred during the twentieth century. Few episodes better capture the long-standing upstate-downstate divide in New York than the story of how mountain water came to flow from spigots in Brooklyn and Manhattan.

Soll concludes by focusing on the landmark watershed protection agreement signed in 1997 between the city, watershed residents, environmental organizations, and the state and federal governments. After decades of rancor between the city and Catskill residents, the two sides set aside their differences to forge a new model of environmental stewardship. His account of this unlikely environmental success story offers a behind the scenes perspective on the nation's most ambitious and wide-ranging watershed protection program.

David Soll is Assistant Professor in the Watershed Institute for Collaborative Environmental Studies at the University of Wisconsin-Eau Claire.