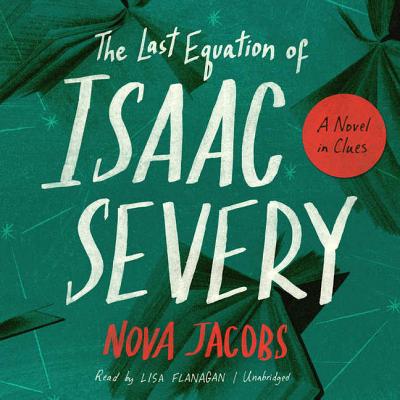 “Isaac Severy has died and taken the secret of his last mathematical equation with him. Except that he has also hidden clues to a hiding place for this final work and shares these clues with his adopted granddaughter, Hazel, who he has charged with finding his hidden treasure and getting it into the hands of a trusted colleague. But she's not the only one looking for his equation, and some of the other searchers are dangerous indeed. This inviting mystery allows us to follow along as Hazel makes her way toward the answer, so be prepared to put on your thinking cap and get out your best clue-solving approach - you'll need all the help you can get. I absolutely loved this debut!”
— Linda Bond, Auntie's Bookstore, Spokane, WA

“What an odd book, peopled with mathematicians and physicists and ordinary folks, most of whom I didn’t especially like; filled with the intrigue of a predictive formula that governments covet but that seems to have gone missing; and all centered on a multi-generational family that has its own share of complex issues. I found myself reading Jacobs’ debut novel almost compulsively, and I can’t wait to see what she publishes next. No prior understanding of proofs or string theory required!”
— Susan Posch, The Book Shoppe (IA), Boone, IA

The Family Fang meets The Storied Life of A. J. Fikry in this literary mystery about a struggling bookseller whose recently deceased grandfather, a famed mathematician, left behind a dangerous equation for her to track down-and protect-before others can get their hands on it.Just days after mathematician and family patriarch Isaac Severy dies of an apparent suicide, his adopted granddaughter Hazel, owner of a struggling Seattle bookstore, receives a letter from him by mail. In it, Isaac alludes to a secretive organization that is after his final bombshell equation, and he charges Hazel with safely delivering it to a trusted colleague. But first, she must find where the equation is hidden.While in Los Angeles for Isaac's funeral, Hazel realizes she's not the only one searching for his life's work, and that the equation's implications have potentially disastrous consequences for the extended Severy family, a group of dysfunctional geniuses unmoored by the sudden death of their patriarch.As agents of an enigmatic company shadow Isaac's favorite son-a theoretical physicist-and a long-lost cousin mysteriously reappears in Los Angeles, the equation slips further from Hazel's grasp. She must unravel a series of maddening clues hidden by Isaac inside one of her favorite novels, drawing her ever closer to his mathematical treasure. But when her efforts fall short, she is forced to enlist the help of those with questionable motives.