Journey Across the Western Interior of Australia (Paperback) 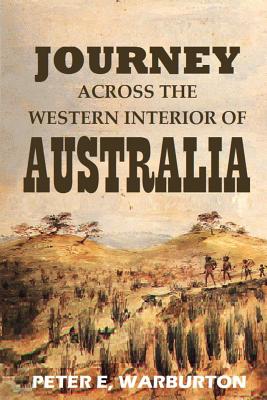 By Peter Egerton Warburton
$7.99
Email or call for price.

Colonel Peter Egerton Warburton (1813-1889), was a British military officer, Commissioner of Police for South Australia, and an Australian explorer. In 1872 he sealed his legacy through a particularly epic expedition from Adelaide crossing the arid centre of Australia to the coast of Western Australia via Alice Springs. Egerton Warburton returned to England in 1874, but finding the climate not to his liking, returned to Australia after a stay of only six weeks, after receiving the Royal Geographical Society's Gold Medal. In 1875 Warburton's account of the expedition, "Journey across the Western Interior of Australia" was published in London, and he was appointed CMG in the Most Distinguished Order of Saint Michael and Saint George is a British order of chivalry. This book is the record of the exploration of Central Australia. Of course, the exploration of Central Australia was only a question of time, and that very limited. It was impossible that the English energy which had, in a single generation, fringed the Australian continent with large cities, carried a line of telegraph from south to north through its very centre, developed a trade already among the most important in the world, and laid the foundations of a new empire destined to be among the most powerful, would long permit any portion of its nominal territory to be unexplored. This volume is a record of what has been done, and almost entirely by the patriotic enterprise, the dogged determination, and the heroic endurance of individual explorers. In an introduction filling nearly half the volume, the attempts to explore the western part of Australia prior to Colonel Warburton's journey are laid out. It is a record of heroic enterprise and pluck. Colonel Warburton's exploration in 1872-3, intended to establish a connection between Southern and Western Australia, is given in his own journal-records. It is a record of almost unparalleled hardship and privation. Almost the last remnant of strength and the last spark of hope were gone when the travellers were rescued from starvation. Starting from Adelaide, Colonel Warburton went north, on Captain Sturt's track as far as the Alice Springs, near the centre of the continent; then, turning west, he traversed a terrible sand-country, emerging at length at De Grey Station, on the western coast. The journal is a very simple record of daily experiences, sometimes almost disabled by excessive prostrations. Some of the entries remind us of the sublime simplicity of Livingstone's journal. Less of a poet and enthusiast than the great African explorer, Colonel Warburton has perhaps equal heroism and modesty. There is a terrible pathos about the later entries, as one by one the camels died, or were killed for food, until the last was gone. After sufferings almost indescribable, during which Colonel Warburton had in sheer exhaustion to be tied on to his camel. Will the gallant leader and his companions be rescued, after a journey of 4000 miles, occupying eighteen months or will they perish in the sands? As a record of achievements, it is a book of which Englishmen may well be proud. We should add that Colonel Warburton's success where others had failed was owing entirely to the use of camels instead of horses. The Australia of the future must chiefly be the Australia of the seaboard; its centre largely consists of sterile and sandy desert.