The Sound of All Things (Hardcover) 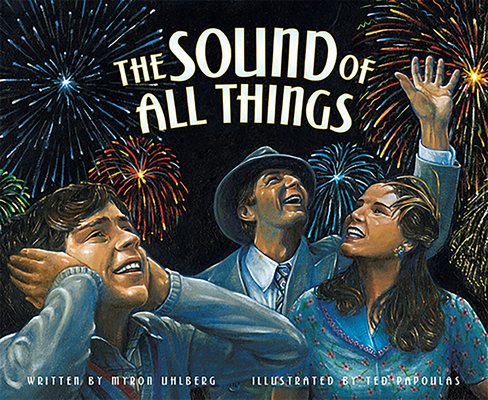 Experience the sights and sounds of 1930s Brooklyn and Coney Island through the eyes—and ears—of a hearing boy and his deaf parents.

A Brooklyn family takes an outing to Coney Island, where they enjoy the rides, the food, and the sights. The father longs to know how everything sounds. Though his son does his best to interpret their noisy surroundings through sign language, he struggles to convey the subtle differences between the "loud" of the ocean and the "loud" of a roller coaster.

When the family drops in at the library after dinner, the boy makes a discovery. Perhaps the words he needs are within reach, after all.

Myron Uhlberg's story, based on his own childhood experiences, covers the almost unique topic within children's books of children raised by deaf parents. Ted Papoulas beautifully and sensitively portrays the family's day and brings the whole experience to life for readers.

Myron Uhlberg is the award-wining and critically acclaimed author of several children's books. Uhlberg is the first-born son of two deaf parents. His first language was ASL (American Sign Language). After graduating from Brandeis University, he served as a paratrooper in the 82nd Airborne Division. He then spent the next forty years in the garment industry. His first book was published when he was sixty-six years old. He has appeared on NPR's Talk of the Nation and was featured in the Ken Burns documentary film, Jackie Robinson. He lives in California.

Ted Papoulas earned his illustration degree from Pratt Institute, where he fell in love with Brooklyn, a continual source of inspiration for his art. The Sound of All Things was his first picture book. He lives in New Jersey.

★ "A tender demonstration of how familial love is like translation—inexact, difficult, and beautiful."—Kirkus Reviews, Starred Review

"Lovely tribute to a bygone era and a boy's commemoration of his parents."—School Library Journal