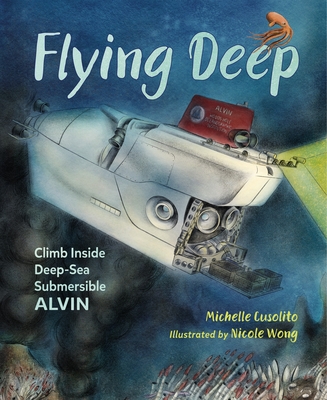 Take a dive in the deep-sea submersible ALVIN and explore the ocean floor. Imagining themselves as the ALVIN’s pilot, readers are invited to investigate the world below the water’s surface as they navigate the depths. With engaging and informative text and fantastic illustrations, Flying Deep is great choice for young science enthusiasts.

Climb aboard Alvin, the famous deep-sea submersible credited with helping to find the Titanic, and take a trip two miles down to the bottom of the ocean.

Experience a day in the life of an Alvin pilot and join scientists at the seafloor to collect samples and conduct research. Along the way, discover what one wears, eats, and talks about during a typical eight-hour trip in a underwater craft and find out more about the animals that live deep in our oceans. Extensive back matter explains how Alvin works, describes the author's research, and includes a glossary and further reading.

Michelle A. Cusolito won the 2016 PEN New England Susan P. Bloom Children's Book Discovery Award for an early version of Flying Deep. She has worked as a fourth grade teacher, a curriculum specialist, and an adjunct professor. She lives in Rochester, MA.

Nicole Wong has illustrated many books for children, including To the Stars!; No Monkeys, No Chocolate; Maxwell's Mountain; and Wild Rose's Weaving. www.nicole-wong.com

♦ Readers join an Alvin pilot and scientists in an exciting journey as they voyage down deep to the ocean floor to collect samples and conduct research. Named for Allyn Vine, who helped pioneer deep submergence research and technology for the Woods Hole Oceanographic Institute, Alvin helped in the exploration of the Titanic wreckage in 1986. "Imagine you're the pilot of Alvin, a deep-sea submersible barely big enough for three," the engaging text begins. Cusolito's inviting, "you are there" narration puts readers inside the submersible to discover what one wears, eats, and talks about during a typical eight-hour journey to learn about life inhabiting the deepest realms of our oceans. How do you breathe? What kind of music might you listen to? How do you see when you "enter thick blackness"? The answers to those and many other questions are answered. The voyage down is not without perils: "Fishing nets or anchor chains could entangle Alvin and trap you." On the seafloor, "Eerie spires loom. Black smokers blast scalding water and poisonous, sooty particles from deep inside Earth." The digitally created illustrations evoke the dark mysteriousness of the deep ocean and depict the crew as a man of color, a white woman, and a white man. Endmatter explains how Alvin works and describes the author's and illustrator's research. An appealing, exhilarating, and informative vicarious journey of discovery.
—Kirkus Reviews, STARRED REVIEW

Since its first launch in 1965, only 40 men and 1 woman have piloted the deep-sea submersible Alvin. Young readers can imagine themselves as one of the pilots in this sensory-rich picture book that uses second-person narration to describe a typical mission in the Pacific Ocean. As the pilot and two scientists (one of whom is a woman) squeeze into the tiny human-occupied vehicle (HOV) and prepare to launch, a surface crew performs final checks. As Alvin "sinks, / slowly spinning / DOWN DOWN DOWN," the digitally rendered illustrations depict not only the progressively darker ocean color but also the changes in marine life, until the HOV, two miles deep, reaches the ocean floor. Here the scientists investigate, record, analyze, and take samples of this extreme ecosystem, avoiding such calamities as rocky columns that could pin them below the surface, before finally resurfacing. Both the wonder and danger are palpable. Back matter offers more information on Alvin and some of the strange organisms living in the ocean's deepest waters. An inviting look at scientists in action.
—Booklist

On the Alvin submersible, three scientists dive into the Pacific Ocean to discover if life thrives at the bottom of the sea. Written in a loose logbook style, the book captures the emotions of the scientists who are hopeful that their work could lead to new discoveries. Cusolito’s narrative takes readers through a normal day on the Alvin and uses sound effects, repetition, and challenging vocabulary to provide kids with a suspenseful and informative plot. (“Alvin sinks, slowly spinning DOWN DOWN DOWN. Your stomach flutters.”) Wong’s realistic yet subdued digital illustrations are a perfect match for the subject matter. In addition, the font color contrasts with the background, making for an easy reading experience. VERDICT: A captivating story that introduces and encourages scientific study, specifically the field of oceanography. A great addition to STEM collections
—School Library Journal

Michelle Cusolito takes readers on a "you are there" mission to examine the site of once-active underwater volcanoes: "Animals here thrive in toxic chemicals, blistering temperatures, and intense pressure. But you're safe inside Alvin." The machine called Alvin can fit only one additional person than the Bathysphere did, but it goes much deeper (more than 14,000 feet, or almost three miles). Nicole Wong's detailed illustrations add an exciting immediacy to the descent and to the flowing wonders of the deep.
—The Washington Post


“You” are the pilot of Alvin, the Woods Hole Oceanographic Institution’s deep-sea submersible first launched in 1965 and still diving deep. A clear text evokes the nearly two-mile journey to the ocean floor, where you and the two scientists aboard “survey the site, confirm thriving life, and collect specimens.” Readers are introduced to the basics of Alvin’s tasks and the nature of the deep-sea biome. Digital illustrations are both exact in their depiction of Alvin’s wondrous mechanics and evocative in their survey of the seemingly otherworldly life deep in the sea. Appended material includes a glossary, a list of resources, and contextualizing notes; kids will doubtless enjoy the instruction to Alvin’s passengers to “PB4UGO.”
—Horn Book Magazine