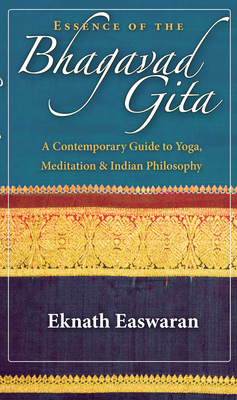 This is book number 2 in the Wisdom of India series.

In this companion to his best-selling translation of the Bhagavad Gita, Easwaran explores the essential themes of this much-loved Indian scripture.

Placing the Gita in a modern context, Easwaran shows how this classic text sheds light on the nature of reality, the illusion of separateness, the search for identity, and the meaning of yoga. The key message of the Gita is how to resolve our conflicts and live in harmony with the deep unity of life, through the principles of yoga and the practice of meditation.

Easwaran grew up in the Hindu tradition and learned Sanskrit from an early age. A foremost translator and interpreter of the Gita, he taught classes on it for forty years, while living out the principles of the Gita in the midst of a busy family and community life.

In the Bhagavad Gita, Sri Krishna, the Lord, doesn't tell the warrior prince Arjuna what to do: he shows Arjuna his choices and then leaves it to Arjuna to decide. Easwaran, too, shows us clearly how these teachings still apply to us - and how, like Arjuna, we must take courage and act wisely if we want our world to thrive.

Eknath Easwaran (1910 - 1999) was brought up in the Hindu tradition and learned Sanskrit from a young age. He was chairman of the English department at a major Indian university when he came to the United States on a Fulbright fellowship in 1959. A gifted teacher and writer who settled in the West, Easwaran lived out the principles of the Gita in the midst of a busy family and community life. His translations of the Indian classics, The Bhagavad Gita, The Upanishads, and The Dhammapada, are all best-sellers in their field, and more than 2 million copies of his books are in print.

"It is impossible to get to the heart of those classics unless you live them, and [Easwaran] did live them. My admiration of the man and his works is boundless." — H U S T O N S M I T H, author of The World’s Religions (Reviewing Easwaran’s translation, The Bhagavad Gita)