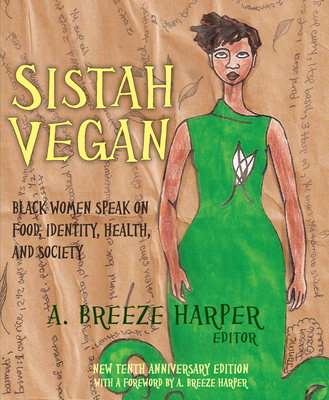 By A. Breeze Harper (Editor), Pattrice Jones (Afterword by)


Currently not in store. Available to order. Usually Ships in 3-7 Days
Sistah Vegan is a series of narratives, critical essays, poems, and reflections from a diverse community of North American black-identified vegans. Collectively, these activists are de-colonizing their bodies and minds via whole-foods veganism. By kicking junk-food habits, the more than thirty contributors all show the way toward longer, stronger, and healthier lives. Suffering from type-2 diabetes, hypertension, high blood pressure, and overweight need not be the way women of color are doomed to be victimized and live out their mature lives. There are healthy alternatives. Sistah Vegan is not about preaching veganism or vegan fundamentalism. Rather, the book is about how a group of black-identified female vegans perceive nutrition, food, ecological sustainability, health and healing, animal rights, parenting, social justice, spirituality, hair care, race, gender-identification, womanism, and liberation that all go against the (refined and bleached) grain of our dysfunctional society. Thought-provoking for the identification and dismantling of environmental racism, ecological devastation, and other social injustices, Sistah Vegan is an in-your-face handbook for our time. It calls upon all of us to make radical changes for the betterment of ourselves, our planet, and—by extension—everyone.
Pattrice Jones is an ecofeminist writer, scholar, and activist who, along with Miriam Jones, cofounded VINE Sanctuary, an LGBTQ-run farmed animal sanctuary that operates within an understanding of the intersection of oppressions. In addition to her books for Lantern, she has contributed chapters to Ecofeminism: Feminist Intersections with Other Animals and the Earth; Confronting Animal Exploitation: Grassroots Essays on Liberation and Veganism; Sister Species: Women, Animals and Social Justice; Sistah Vegan; Contemporary Anarchist Studies; Igniting a Revolution: Voices in Defense of the Earth; and Terrorists or Freedom Fighters?: Reflections on the Liberation of Animal.