Japanese Soul Cooking: Ramen, Tonkatsu, Tempura, and More from the Streets and Kitchens of Tokyo and Beyond [A Cookbook] (Hardcover) 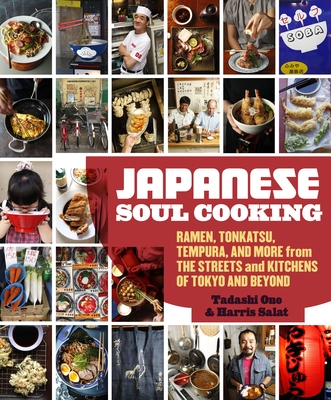 Japanese Soul Cooking: Ramen, Tonkatsu, Tempura, and More from the Streets and Kitchens of Tokyo and Beyond [A Cookbook] (Hardcover)


Backordered. Please call 508.548.5548 for more information.
A collection of more than 100 recipes that introduces Japanese comfort food to American home cooks, exploring new ingredients, techniques, and the surprising origins of popular dishes like gyoza and tempura.

Move over, sushi. It’s time for gyoza, curry, tonkatsu, and furai. These icons of Japanese comfort food cooking are the hearty, flavor-packed, craveable dishes you’ll find in every kitchen and street corner hole-in-the-wall restaurant in Japan.

In Japanese Soul Cooking, Tadashi Ono and Harris Salat introduce you to this irresistible, homey style of cooking. As you explore the range of exciting, satisfying fare, you may recognize some familiar favorites, including ramen, soba, udon, and tempura. Other, lesser known Japanese classics, such as wafu pasta (spaghetti with bold, fragrant toppings like miso meat sauce), tatsuta-age (fried chicken marinated in garlic, ginger, and other Japanese seasonings), and savory omelets with crabmeat and shiitake mushrooms will instantly become standards in your kitchen as well. With foolproof instructions and step-by-step photographs, you’ll soon be knocking out chahan fried rice, mentaiko spaghetti, saikoro steak, and more for friends and family.

Ono and Salat’s fascinating exploration of the surprising origins and global influences behind popular dishes is accompanied by rich location photography that captures the energy and essence of this food in everyday life, bringing beloved Japanese comfort food to Western home cooks for the first time.
TADASHI ONO is a Japanese chef and author based in New York City. He has been featured in the New York Times, Gourmet, and Food & Wine.

HAARIS SALAT's stories about food and culture have appeared in the New York Times, Saveur, and Gourmet. In 2012, Salat opened the Japanese comfort food restaurant Ganso in Brooklyn (gansonyc.com). He is the author, with Takashi Yagihashi, of Takashi’s Noodles.

Together, Ono and Salat are the authors of Japanese Hot Pots and The Japanese Grill.
“This is the book on Japanese cooking I have been waiting for without knowing it! Tadashi and Harris have compiled a wonderful collection of recipes that veers sharply from the mysterious and lofty world of sushi and kaiseki and lands smack dab in the home kitchen, telling a great story of foreign culinary traditions colliding with traditional Japanese technique along the way.” —Andy Ricker, chef-owner of Pok Pok and author of Pok Pok and The Drinking Food of Thailand

“Sushi? Bah! Japanese food is so much more than raw fish, and this book is a joyful (and useful!) exploration of the earthy, fatty, meaty, rib-sticking, lip-smacking fare—the noodles and curries and deep-fried delights—that millions of Japanese depend on every day. I get hungry just thinking about it.” —Matt Gross, editor, BonAppetit.com

“Tadashi Ono and Harris Salat bring to mouthwatering life a fascinating story: how Western influences opened up a nation’s taste buds and created a new Japanese cuisine of modern comfort food classics. Anyone obsessed with a steaming bowl of ramen, light-as-air tempura, or the perfect gyoza will find that there’s all that—and more—right here, just waiting to be cooked and devoured." —Joe Yonan, author of Eat Your Vegetables and food and travel editor of the Washington Post