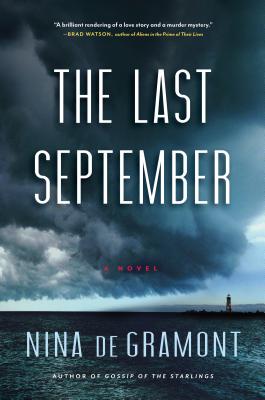 Set against the desolate autumn beauty of Cape Cod, The Last September is a riveting emotional puzzle that takes readers inside the psyche of a woman facing the meaning of love and loyalty.

Brett has been in love with Charlie ever since he took her skiing on a lovely Colorado night fourteen years ago. And now, living in a seaside cottage on Cape Cod with their young daughter, it looks as if they have settled into the life they desired. However, Brett and Charlie’s marriage has been tenuous for quite some time. When Charlie’s unstable younger brother plans to move in with them, the tension simmering under the surface of their marriage boils over.

But what happened to Charlie next was unfathomable. Charlie was the golden boy so charismatic that he charmed everyone who crossed his path; who never shied away from a challenge; who saw life as one big adventure; who could always rescue his troubled brother, no matter how unpredictable the situation.

So who is to blame for the tragic turn of events? And why does Brett feel responsible?

Nina de Gramont is the author of the story collection Of Cats and Men, which was a Book Sense selection and won a Discovery Award from the New England Booksellers Association. Her first novel, Gossip of the Starlings, was also a Book Sense pick. She is the coeditor of an anthology called Choice and the author of several young adult novels. She teaches in the MFA program at the University of North Carolina–Wilmington. Find her at www.ninadegramont.com.

One of Ten Great Fall Thrillers from Entertainment Weekly

"With an artist's eye and a poet's heart, de Gramont realizes a world of love, mystery, and the shattering sorrow of mental illness, deceit, hope, and lives cut short. Impossible to put down." —Library Journal (starred review)

"The Last September is a wonderful early fall read. As a picture of a marriage struggling under the weight of expectation and mental illness, it is nearly flawless. De Gramont should be proud.” —New York Journal of Books
“A moody murder mystery . . . De Gramont's latest boasts lovely, understated writing, sharply drawn settings--Boulder, Amherst, and Cape Cod--and, once again, characters who are irresistibly attractive, flawed, and dangerous . . . But it is also an emotionally intense study of how a transcendent love becomes a fraying marriage . . .  A fine literary whodunit from an accomplished storyteller." —Kirkus Reviews

“Brilliant rendering of love story, murder mystery, pitch-perfect study of horrific 'ordinary' mental illness, and that rare coming of age novel that deals with adults, who actually do come of age in the most difficult ways. I was hooked by the first paragraph, which somehow contains all the beautiful, luminous grief of the whole story, and I truly did not want to let it go in the end.” —Brad Watson, author of Aliens in the Prime of Their Lives

“The Last Septemberis a wonderful, glowing book populated by characters that become a part of your life long after the last page has been turned. It is the type of novel writers admire and readers long for.” —Jason Mott, author of The Returned

“Nina De Gramont’s The Last September portrays an immediately gripping world of secrets, trauma, and conflicting loyalties.  Spanning mental illness, the meaning of family, and the lengths we go to for love, this novel begs to be read in a single sitting. . . A literary novel of both suspense and emotion, this flashback-filled murder mystery has broad appeal.”—Foreword Reviews

“Nina de Gramont writes excellent characters and a dazzling storyline involving mental illness, family, infidelity, relationships, love and murder.The Last September is one of the best books I’ve read this year. It’s a masterful mediation on relationships.”—Entertainment Realm
“A convincing and suspenseful novel, well-written,  precise,  and poignant in its depiction of human nature in dire distress.” —Sheila Kohler, author of Dreaming for Freud

“The Last September is a riveting emotional puzzle that takes readers inside the psyche of a woman facing the meaning of love and loyalty.”—Story Matters

“A highly readable novel, the emphasis here is on a troubled marriage and not the murder mystery.”—Swiftly Tilting Planet

“Full of poignant prose, a brilliant presentation of Eli’s illness and the toll it takes on his family, and a plot that ebbs and tides with the ocean and sand dunes, The Last September in non-put-down-able.  Sleek and elegant, The Last September is a must read.”—The Review Broads