No Compromise: The Work of Florence Knoll (Hardcover) 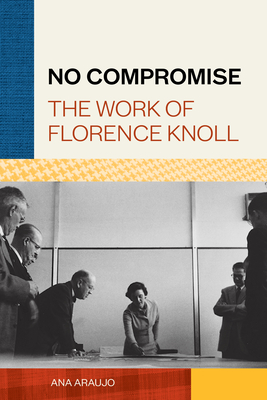 No Compromise: The Work of Florence Knoll (Hardcover)


Currently not in store. Available to order. Usually Ships in 3-7 Days
Florence Knoll (1917–2019) was a leading force of modern design. She worked from 1945 to 1965 at Knoll Associates, first as business partner with her husband Hans Knoll, later as president after his death, and, finally, as design director. Her commissions became hallmarks of the modern era, including the Barcelona Chair by Mies van der Rohe, the Diamond Chair by Harry Bertoia, and the Platner Collection by Warren Platner. She created classics like the Parallel Bar Collection, still in production today.

Knoll invented the visual language of the modern office through her groundbreaking interiors and the creation of the acclaimed "Knoll look," which remains a standard for interior design today. She reinvigorated the International Style through humanizing textiles, lighting, and accessories. Although Knoll's motto was "no compromise, ever," as a woman in a white, upper-middle-class, male-dominated environment, she often had to make accommodations to gain respect from her colleagues, clients, and collaborators. No Compromise looks at Knoll's extraordinary career in close-up, from her student days to her professional accomplishments.
Ana Araujo is an architect, teacher, and researcher, whose mission is to amplify the role of women and the presence of a feminine sensibility in the creative fields. She has published and exhibited her work internationally. She currently leads a design studio at the Architectural Association in London.
"Ana Araujo’s No Compromise: The Work of Florence Knoll is the first monograph of Knoll’s work, which changed interior architecture, not to mention the furniture business, at a time when both fields were heavily dominated by men....“No Compromise” is the first attempt to grapple with her complicated legacy."
- The Wall Street Journal,


"Ana Araújo has captured the essence of Florence Knoll's life from her early education through her many professional milestones….And in the end, one comes away from this book amazed at all her accomplishments and her drive to succeed."
- ALA/Choice