The African Lookbook: A Visual History of 100 Years of African Women (Hardcover) 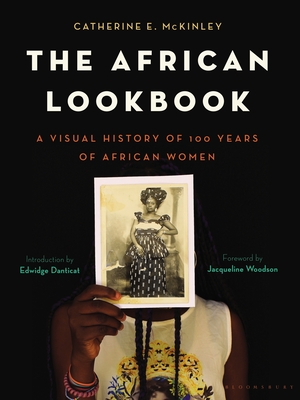 An unprecedented visual history of African women told in striking and subversive historical photographs—featuring an Introduction by Edwidge Danticat and a Foreword by Jacqueline Woodson.

Most of us grew up with images of African women that were purely anthropological—bright displays of exotica where the deeper personhood seemed tucked away. Or they were chronicles of war and poverty—“poverty porn.” But now, curator Catherine E. McKinley draws on her extensive collection of historical and contemporary photos to present a visual history spanning a hundred-year arc (1870–1970) of what is among the earliest photography on the continent. These images tell a different story of African women: how deeply cosmopolitan and modern they are in their style; how they were able to reclaim the tools of the colonial oppression that threatened their selfhood and livelihoods.

Featuring works by celebrated African masters, African studios of local legend, and anonymous artists, The African Lookbook captures the dignity, playfulness, austerity, grandeur, and fantasy-making of African women across centuries. McKinley also features photos by Europeans—most starkly, striking nudes—revealing the relationships between white men and the Black female sitters where, at best, a grave power imbalance lies. It’s a bittersweet truth that when there is exploitation there can also be profound resistance expressed in unexpected ways—even if it’s only in gazing back. These photos tell the story of how the sewing machine and the camera became powerful tools for women’s self-expression, revealing a truly glorious display of everyday beauty.

Catherine E. McKinley is a curator and writer whose books include the critically acclaimed Indigo, a journey along the ancient indigo trade routes in West Africa, and The Book of Sarahs, a memoir about growing up Black and Jewish in the 1960s–80s. She's taught creative nonfiction writing at Sarah Lawrence College and Columbia University. The McKinley Collection, featured here, is a personal archive representing African photographies from 1870 to the present. She lives in New York City.

Edwidge Danticat is the author of several books, including Breath, Eyes, Memory, an Oprah's Book Club selection; Krik? Krak!, a National Book Award finalist; The Farming of Bones, an American Book Award winner; and the novel-in-stories, The Dew Breaker. She is the editor of The Butterfly’s Way: Voices from the Haitian Diaspora in the United States and The Beacon Best of 2000: Great Writing by Men and Women of All Colors and Cultures, Haiti Noir and Haiti Noir 2, and Best American Essays 2011. She has written several books for young adults and children—Anacaona, Behind the Mountains, Eight Days, The Last Mapou, Mama's Nightingale, and Untwine—as well as a travel narrative, After the Dance, A Walk Through Carnival in Jacmel. Her memoir, Brother, I’m Dying, was a 2007 finalist for the National Book Award and a 2008 winner of the National Book Critics Circle Award for autobiography. She is a 2009 MacArthur Fellow.

"McKinley expertly guides readers through a history lesson of the ways fashion in these countries is connected with colonialism, industrialization and numerous traditions and styles of dressing . . . McKinley delicately reminds us that African traditions, styles, creations and the people themselves — with their many layers and differences — don’t need to come from fictional kingdoms like Zamunda or Wakanda to deserve attention. The real, everyday beauty of Africa is worth canonizing beyond the continent." - New York Times Book Review

"The curator draws on her collection of historical and contemporary photographs of African girls and women for a striking visual history spanning decades." - USA Today, "5 Books not to Miss"

"Black is beautiful--no matter what era or geographical region. This historical photography collection depicts that truth stunningly, telling the visual and textual story of African women living on the motherland between 1870 and 1970. Curator Catherine E. McKinley sheds light on their style, relationship dynamics, and the ways they’ve defeated colonial oppression to flourish on their own, presenting a hardcover that portrays Black women with dignity." - LEVEL

"The African Lookbook captures the dignity, grandeur, austerity and liveliness of African women across the century through images curated from celebrated African masters, studios and anonymous artists." - The Root

"The African Lookbook is a remarkable repository for African women's rich history, their influence on global fashion and photography spanning 100 years. . . . In what remains an incredibly white-washed fashion industry filled with cultural appropriation, very little credit given to Africans and Black women who have (and continue to) contribute to the industry, The African Lookbook upends that reality within its pages." - OkayAfrica

"What McKinley offers in this compelling, quixotic book is something closer to a testament—a bold declaration of the enduring strength, beauty and power of African women, many of whom gaze at the camera with evident self-possession. The African Lookbook is a pleasure to absorb, whether you already know about the history of photography on the African continent or are new to the conversation." - BookPage

"From young girls in Mali wearing ‘hot’ outfits beneath attire deemed respectable by Muslim culture to women defying Western Christianity by wearing traditional African attire to church, McKinley focuses on the ways in which fashion is a form of protest and resistance, preserving history in ‘more resilient and revealing’ ways than any other. The African Lookbook is an exquisite collection of African photographs and stories bearing witness to the power and grace of African women." - Booklist

"[A] bold act of reclaiming. Here, in photographs and lyrical prose, McKinley defies Western stereotypes about African women." - The Millions “A Year in Reading: Nadia Owusu”

"McKinley sheds light on the erasure and resilience of African women image-makers. The African Lookbook reads like a collective photo album with critical captions accompanying a trove of rare archival, vintage, vernacular, and contemporary images. McKinley draws attention to power dynamics, consent, subversion, and identity, examining the lives of African women ‘in the pursuit of modernity and resistance to colonialism and gender violence.’ She unearths and dissects the grave imbalances that have long plagued African visual archives." - C&

"How lucky we are that Catherine McKinley has collected this exquisite series of photographs from all corners of the African continent . . . proof of the range of beauty and elegance the world was otherwise telling us we could not possess." - Edwidge Danticat, from the Introduction

"As I slowly moved through the stunningly beautiful pages of The African Lookbook, I found myself being transported by the glorious photographs Catherine McKinley has collected. . . . We took and continue to take the skin, the pain, the fabric, the tools we have. And with all of this--as Catherine McKinley has done here--we make something as beautiful as our own selves." - Jacqueline Woodson, from the Foreword

"Our mothers are our source. Similarly, the ‘Motherland’ is the source of what we come to know as Blackness in America. That’s why Catherine McKinley’s The African Lookbook is a welcome bridge across the diaspora. . . . The African Lookbook is an ode to Black womanhood on the continent, and an ideal way to bring the Motherland to your mother." - The Root's "The Glow Up"

"In the fashion world, a "lookbook" is a collection of photos highlighting, say, a fashion designer's work or a fashion model. The African Lookbook has a different agenda: images that present a stereotype-busting way to look at African women, their relationship with fashion — and their ability to turn the sewing machine from a tool synonymous with toil, lack of choice and oppression into a means for them to achieve economic power." - NPR.org’s Goats and Soda

"McKinley’s collection thus provides a refreshing new look at the visual history of African women. In choosing to collect images that exclusively contained female subjects, we are given a new, more in-depth look at the history of women on the continent and can trace the way visual narratives change and adapt with the times, especially in the context of decolonization. Rich with anecdotes and untold narratives, The African Lookbook is a valuable and exciting trove of feminine history on the African continent." - Musée Magazine

"The African Lookbook—which weaves together historical photos and McKinley’s own research and musings—offers an encapsulation of, and a window into, the rich history of West African photography—and the women who were at the center of the frame." —Al Jazeera