What I See: The Black Flag Photographs of Glen E. Friedman (Hardcover) 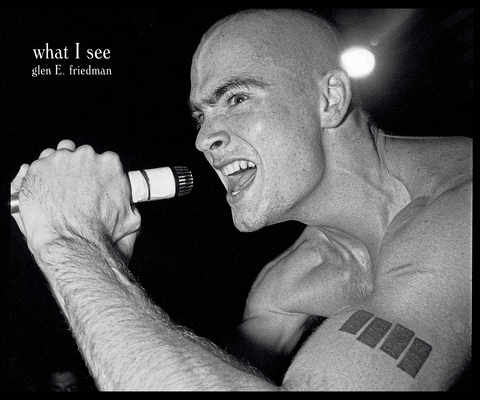 What I See: The Black Flag Photographs of Glen E. Friedman (Hardcover)

A stunning collection of the most iconic photographs ever taken of Black Flag, along with never-before-seen shots and a foreword by Chuck Dukowski. 256 jam-packed pages, over 300 photographs, and over 70% of the photos have never been seen.

"This gorgeous book collects Friedman's] photographs chronologically, while capturing the full intensity, drama, and ethos of the group . . . For those of us who were too young to be there, this is the next best thing. These still images come to life with every turn of the page, so put on Damaged and dig in."
--The Big Takeover

"Many of Friedman's photos of the band midperformance include, critically, galvanized audience members, which reinforces the idea that early punk was a social movement. Friedman . . . has been fighting the good fight with his lens for decades. What I See documents a band standing in for any artist committed to questioning rules and living with integrity."
--Shelf Awareness, STARRED Review

What I See: The Black Flag Photographs of Glen E. Friedman is an incredible compilation of all of Friedman's most iconic and recognizable images (from 1980 to 1983), of this seminal American punk band, as well as over one hundred never-before-seen photos made during those phenomenal peak years in the group's history.

The book includes a foreword by Chuck Dukowski, a cofounder and bass player of Black Flag. Friedman's own introduction to the book takes readers through his journey with the group, from the very first time he heard their music, to his perspectives on the music of the era, to the how, why, and what Black Flag were doing at the time. His words provide additional context to the imagery, explaining what drove him to create his art alongside the band.

From the streets around Black Flag's single-room home base/office, rehearsing for their first album, handing out flyers, wheat-pasting posters, driving for hours to a show and returning the same night, house parties, clubs, to the big stage and the beach, Glen E. Friedman was there with his heart, soul, and most importantly his camera. In What I See, he shares with us and inspires us with these images that were made over an incredibly volatile four-year time span.

Glen E. Friedman, one of the most important photographers of his generation, is known for his influential and iconic images of rebellious artists from classic skateboarding, punk, and hip-hop cultures. As a true artist his process was much more incendiary than it was documentary. Friedman, first published at the age of fourteen, has produced over one hundred record covers, countless magazine pages, and almost a dozen books, including DogTown: The Legend of the Z-Boys, Keep Your Eyes Open, The Idealist, Recognize, My Rules, and Together Forever: The Run-DMC and Beastie Boys Photographs. His work is now included in a number of notable international collections, including the Metropolitan Museum of Art and the Smithsonian Institution.