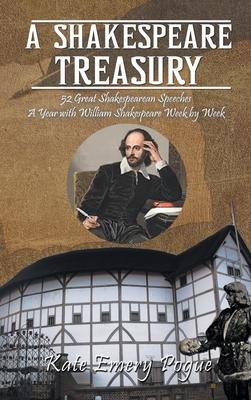 A Shakespeare Treasury gathers together in one volume 52 of Shakespeare's greatest and most memorable speeches. Chosen and presented in the order in which they were written, they suggest the progression of Shakespeare's writing style and reveal the changing taste of his audiences over a twenty-five year period (1588-1613). Each selection has an introductory paragraph telling the reader about the character who is speaking, what the situation is and who is listening. By reading one speech a week the reader can become acquainted with all these soliloquies and monologues in a single, enriching year. As Mrs. Pogue points out in her Introduction, "Shakespeare holds a critical place in our history and culture. To know his characters is to learn about ourselves. Untangling the language of Shakespeare's monologues reveals breathtaking depths of meaning encoded in his extraordinary metaphors, similes and other figures of speech. Never has there been so much help in understanding, or so much reward in comprehending, the treasure that is Shakespeare."