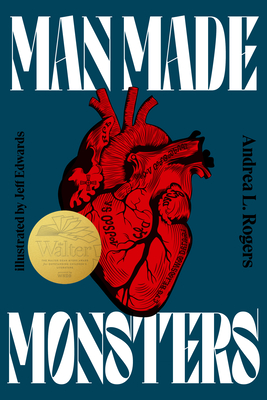 
On Our Shelves Now Online inventory updates every 24 hours. Call 508.548.5548 to verify.
Tsalagi should never have to live on human blood, but sometimes things just happen to sixteen-year-old girls.

Making her YA debut, Cherokee writer Andrea L. Rogers takes her place as one of the most striking voices of the horror renaissance that has swept the last decade.

Horror fans will get their thrills in this collection – from werewolves to vampires to zombies – all the time-worn horror baddies are there. But so are predators of a distinctly American variety – the horrors of empire, of intimate partner violence, of dispossession. And so too the monsters of Rogers’ imagination, that draw upon long-told Cherokee stories – of Deer Woman, fantastical sea creatures, and more.

Following one extended Cherokee family across the centuries, from the tribe’s homelands in Georgia in the 1830s to World War I, the Vietnam War, our own present, and well into the future, each story delivers a slice of a particular time period that will leave readers longing for more.

But don’t just take it from us – award-winning writer of The Only Good Indians and Mongrels Stephen Graham Jones says that "Andrea Rogers writes like the house is on fire and her words are the only thing that can put it out."

Man Made Monsters is a masterful, heartfelt, haunting collection ripe for crossover appeal – just don’t blame us if you start hearing things that go bump in the night.
Andrea L. Rogers is a citizen of the Cherokee Nation. She grew up in Tulsa, Oklahoma. She graduated with an MFA from the Institute of American Indian Arts in Santa Fe. Her stories have appeared in several literary journals. In 2020, Capstone published Mary and the Trail of Tears. Her work has also appeared in You Too? 25 Voices Share Their #METoo stories from Inkyard Press, Ancestor Approved: Intertribal Stories for Kids from Heartdrum, and in the anthology Allies by DK. Her picture book called, When We Gather, is forthcoming from Heartdrum.

Jeff Edwards, of Vian, OK, is an award-winning Cherokee graphic artist who has worked for the Cherokee Nation for over 20 years. He is a language activist and has worked on numerous projects that have projected the Cherokee language into the global spotlight. He attended Haskell Indian Nations University in Lawrence, KS and received his Associates Degree in Liberal Arts and completed his Bachelor of Arts in Graphic Design at Northeastern State University in Tahlequah. His artwork is almost exclusively Cherokee themed, and he prefers using the Cherokee Syllabary opposed to English to promote the Cherokee language and likes using old cultural concepts but expressing them with modern electronic tools.

[STAR] “Startling…Will leave readers—adults as well as teens—unsettled, feeling like they have caught a glimpse into a larger world, and like there is a wider one still, just out of sight.”—Booklist (starred)

[STAR] “Spine-tingling...artfully tackles themes of colonialism and its effects on entire generations, for a simultaneously frightening and enthralling read.”—Publishers Weekly (starred)

“Teen and adult readers looking for a taste of the gorgeously gruesome should snap up this dark, engrossing jewel.”— Shelf-Awareness

[STAR] “This stunning collection of short stories follows a Cherokee family through two centuries, beginning with something akin to a vampire attack and ending with zombies… Rogers has a rich authorial toolbox as she effortlessly swaps between narrator points of view, story length, and writing styles to best tell each story in a way befitting of its protagonist and rooted in a specific time and place… Generational trauma is present here, but this is not a collection of tragedy and victims, and there is room for revenge, for defiance, and for resilience even among literal and metaphorical monsters closing in all around this sprawling family.”— Bulletin of the Center for Children’s Books (starred)

"Rogers’s story collection follows one extended Cherokee family across centuries. Each story elicits chills in different ways, while also feeling incredibly grounded and intoxicating. From vampires to the Vietnam War; they vary in genre and style while Cherokee artist Jeff Edwards illustrates each story. A haunting and stunning book for you to enjoy." — Buzzfeed

“Man Made Monsters is a brilliant and expansive journey across time, seen through a Cherokee lens, written by the brilliant and essential voice of Andrea Rogers. This collection is full to the brim with voice and breadth, including but not limited to magic, horror, and fantasy. The book is fun, funny, and dead-serious. It is beautifully written, and it is full of monsters.”

[STAR] “Many of these stories sound as if they were passed down as family histories. It may read like speculative fiction, but it feels like truth.”— Horn Book (starred)

“Sometimes the only way to grapple with a monstrous past is through horror. Andrea L. Rogers offers up more than a dozen linked stories, tracing an extended Cherokee family from the Trail of Tears to the present. Along the way, we meet a German vampire hiding his bloodlust along a violent frontier, a mixed-race student of science trying to bring a young boy back to life, and werewolves, ghosts, zombies and the Deer Woman. The book's rich illustrations incorporate the Cherokee syllabary, hinting at the layers of history beneath each tale.” — Minneapolis Star Tribune