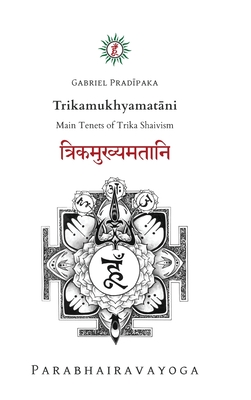 Trikamukhyamatāni or Main Tenets of Trika Shaivism is a short, but very important book on the philosophy of Kashmir in Northern India. The word 'philosophy' is just a Greek-based English translation or rather a western interpretation of the Sanskrit term 'darśana'. Darśana ('seeing', 'observing') comes from the root 'dṛś' which means 'to see'. Accepting this fact is a key point when it comes to philosophies of India. Understanding a philosophy means 'seeing', 'observing' from the viewpoint of the philosophical system and according to this, one has to gradually change the base of one's own perspective to get the benefits of any study.

Guru Gabriel Pradīpaka has made a great effort to present the necessary teachings to support the act of changing the viewpoint of those who are beginners in Trika Shaivism, but who, at the same time, are serious spiritual aspirants, zealous about diving into the ancient treasure called Trika.

Trika Shaivism teaches how to see with the Eye of the Lord. For this very reason, the study of the main tenets contained in this book is simply crucial and I recommend it for those who know that a building needs a strong foundation. Trikamukhyamatāni is not a mere summary of Trika Shaivism, but a foundational treatise that helps recognize the Divine perspective which originally lies in each and every human being.