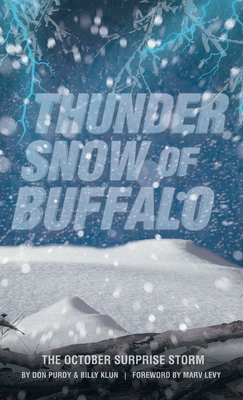 The City of Buffalo, New York, is known for its snowy reputation, but the snowstorm of October 2006 was beyond unexpected.

It caught Buffalonians so off guard that it merits this book of true stories from citizens, including a foreword by Hall of Fame Coach Marv Levy and remarks from Mayor Byron Brown.

Don Purdy, a longtime executive with the Buffalo Bills, shares how he, his family, and the football organization overcame the surprise storm, which occurred Friday the 13th and remains the most destructive in Buffalo's history. Over thirty players, coaches, and staff deliver their own fascinating memories, such as leaving their families behind without power or heat to travel to Detroit for a regular season game, along with never-before shared accounts of the inner workings of One Bills Drive and the National Football League.

Co-Author Billy Klun delivers superb literary framing throughout and even takes the reader inside his then fourteen-year-old mind struggling to make sense of a landscape turned upside down over night. In the overwhelming aftermath, the city's recovery efforts were boosted by a pair of highly inventive, altruistic volunteers determined to replant the 55,000 lost trees and provide the downed tree carcasses a proud second life - Buffalo style.

In addition to the Bills organization's quick-thinking and innovative operational adjustments, Thunder Snow of Buffalo offers plenty of humor and laughs, including rookie players from the South asking, "If this happens in October, what will the real winter months be like?"

Don Purdy, originally from Speculator, New York in the Adirondacks, served in the front office of the Buffalo Bills for twenty-seven years, with his last and longest role being Director of Football Administration. He saw the Bills through four Super Bowl appearances and managed a twenty-million-dollar budget, including workers' compensation, team travel, and player contracts. Purdy is now Senior Adviser for Avrij Analytics, a leader in AI scouting and hiring platforms and serves on the President's Advisory Board of Houghton College, as an alumni. Billy Klun is a licensed mental health clinician specializing in addiction, geriatric, and personality disordered populations currently in private practice outside of Boston, Massachusetts. After earning his degree in psychology and English from SUNY at Buffalo, he received his Master of Arts in mental health counseling at the Boston College Lynch School of Education and his second master's degree at UMass Boston in management of aging services.