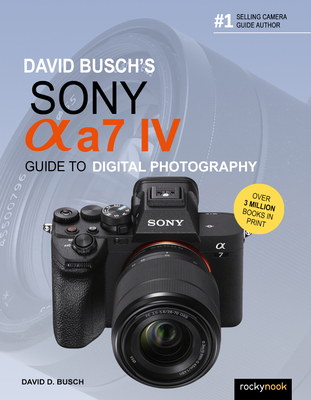 
Currently not in store. Available to order. Usually Ships in 3-7 Days
David Busch's Sony Alpha a7 IV Guide to Digital Photography is the most comprehensive resource and reference for Sony's long-awaited 33-megapixel full frame mirrorless camera. Capable of 10 frame-per-second bursts even at full resolution, the a7 IV is fast enough for action photography, and its enhanced dynamic range delivers the image quality that the most demanding landscape or fine-art photographer requires. This camera's remarkable low-light performance, fast sensor-based phase detect autofocus (with real-time face and eye tracking in both still and movie modes), and improved 5-axis in-body image stabilization, the a7 IV has all the tools needed to take incredible images. This book will show you how to master those features as you explore the world of digital photography and hone your creativity with your a7 IV.Filled with detailed how-to steps and full-color illustrations, David Busch's Sony Alpha a7 IV Guide to Digital Photography covers every feature of this camera in depth, from taking your first photos through advanced details of setup, exposure, lens selection, lighting, and more, and relates each feature to specific photographic techniques and situations. Also included is the handy camera "roadmap" chapter, an easy-to-use visual guide to the camera's features and controls. Learn when to use every option and, more importantly, when not to use them, by following the author's recommended settings for each menu entry. With best-selling photographer and mentor David Busch as your guide, you'll quickly have full creative mastery of your camera's capabilities, whether you're shooting on the job, as an advanced enthusiast exploring full frame photography for the first time, or are just out for fun. Start building your knowledge and confidence, while bringing your vision to light with the Sony a7 IV.
With more than two million books in print, David D. Busch is the world's #1 best-selling camera guide author, with more than 100 guidebooks for Nikon, Canon, Sony, Olympus, Pentax, and Panasonic cameras, and many popular books devoted to digital photography and imaging techniques. His best-sellers include Digital SLR Cameras and Photography for Dummies, which has sold more than 300,000 copies in five editions, and Mastering Digital SLR Photography, now in its Fourth Edition.The graduate of Kent State University is a former newspaper reporter/photographer, and operated his own commercial photo studio, shooting sports, weddings, portraits, fashion, architecture, product photography, and travel images. For 22 years he was a principal in CCS/PR, Inc., one of the largest public relations/marketing firms based in San Diego, working on press conferences, press kits, media tours, and sponsored photo trade magazine articles for Eastman Kodak Company and other imaging companies. His 2500 articles and accompanying photos have appeared inside and on the covers of hundreds of magazines, including Popular Photography, Rangefinder, and Professional Photographer.For the last decade, Busch has devoted much of his time to sharing his photographic expertise, both in publications, and in seminar/workshops he hosts at the Cleveland Photographic Society School of Photography. He has been a call-in guest for 21 different radio shows nationally and in major markets, including WTOP-AM (Washington), KYW-AM (Philadelphia), USA Network (Daybreak USA), WPHM-AM (Detroit), KMJE-FM (Sacramento), CJAD-AM (Montreal), WBIX-AM (Boston), ABC Radio Network (Jonathan & Mary Show). He's also been a call-in guest for one Canadian television show, and appeared live on Breakfast Television in Toronto, the Today Show of the Great White North.With a total of more than 200 books to his credit, Busch has had as many as five books appear simultaneously in the Amazon.com Top 25 Digital Photography Books, and when Michael Carr of About.com named the top five digital photography books for beginners, the initial #1 and #2 choices were Busch's Digital Photography All-in-One Desk Reference for Dummies and Mastering Digital Photography. His work has been translated into Arabic, Spanish, Chinese, Japanese, Portuguese, Bulgarian, German, Italian, French, and other languages. Busch lives in Ravenna, Ohio, and you can find him online at www.dslrguides.com.