Life in Hot Water: Wildlife at the Bottom of the Ocean (Hardcover) 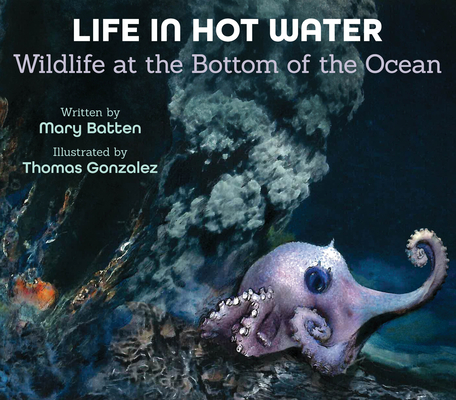 Life in Hot Water: Wildlife at the Bottom of the Ocean (Hardcover)


On Our Shelves Now Online inventory updates every 24 hours. Call 508.548.5548 to verify.
A dramatic overview of the deep-sea extremophiles that thrive in scalding water and permanent darkness at the bottom of the ocean

The scalding-hot water gushing from vents at the bottom of the ocean is one of the most extreme environments on Earth. Yet over millions of years, many organisms—from chemical-eating bacteria to eyeless crabs and iron-shelled snails—have evolved in amazing ways that enable them to thrive in this unlikely habitat. Scientists are hard at work to learn more about the complex ecosystems of the ocean depths.

Award-winning science writer Mary Batten and New York Times best-selling illustrator Thomas Gonzalez, the masterful duo that created Life in a Frozen World, team up again in this impressive overview of hydrothermal ocean vents. Her clear, informative text coupled with his unique and eerily realistic paintings of sights never seen on land—gushing "black smokers," ghostly blind shrimp, red-plumed tube worms—will entice readers to learn more about this once-hidden world at the bottom of the sea.
Mary Batten is an award-winning writer for television, film, and publishing. Her many writing projects have taken her into tropical rainforests, astronomical observatories, scientific laboratories, and medical research centers. She is the author of numerous articles on science topics as well as a number of children's books. Batten was nominated for an Emmy for her work on the Children's Television Workshop's science series 3-2-1-CONTACT. In the 1990s she worked with The Cousteau Society, where she acquired a lifelong love of the ocean. Visit her at www.marybatten.com

Thomas Gonzalez is an illustrator, designer, and portrait artist. A native of Cuba, Gonzalez came to the United States when he was ten years old. He studied at the Atlanta School of Art (now called Savannah of Art and Design). After working at the Coca-Cola Company for more than twenty years, Tom held several creative positions with other global brands. He has illustrated many children's picture books, including 14 Cows for America, a NYT best seller.
"[A] fact-packed read that spotlights an ecosystem thriving at the extremes. . . . Gonzalez's strikingly realistic pastel, colored pencil, and airbrush spreads, meanwhile, offer close-up views. . . . [A] fascinating glimpse into life that seemingly defies all odds."—Publishers Weekly