The Many Deaths of Laila Starr (Paperback) 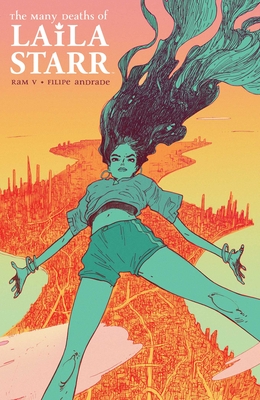 The Many Deaths of Laila Starr (Paperback)


Currently not in store. Available to order. Usually Ships in 3-7 Days
Humanity is on the verge of discovering immortality, which means the avatar of Death is out of a job… or is she?

Humanity is on the verge of discovering immortality. As a result, the avatar of Death is cast down to Earth to live a mortal life in Mumbai as twenty-something Laila Starr. Struggling with her newfound mortality, Laila has found a way to be placed in the time and place where the creator of immortality will be born. Will Laila take her chance to stop mankind from permanently altering the cycle of life, or will death really become a thing of the past? A powerful new graphic novel from award-winning writer Ram V (These Savage Shores, Swamp Thing) and Filipe Andrade (Captain Marvel) that explores the fine line between living and dying through the lens of magical realism. Collects The Many Deaths of Laila Starr #1-5.
Ram V. is an award winning author and creator of comics & graphic novels such as Grafity’s Wall, These Savage Shores, & Blue in Green. Since publishing his first book in 2016, Ram’s work has gone on to garner critical and popular success and multiple awards. Apart from creating original work, since 2018 Ram has also written for iconic characters & titles at DC Comics and Marvel. Filipe Andrade is an artist from Lisbon, Portugal. He has collaborated and published with BOOM! Studios, Marvel, MTV Networks, Riot Games, and more. The Many Deaths of Laila Starr comic series launched as Ram V.’s highest selling original series in his career by 200+%.
"A fantastic premise, heady ideas, and absorbing art"
— Entertainment Weekly