The Magnificent Shiva: Why there is no one like Lord Shiva? (Paperback) 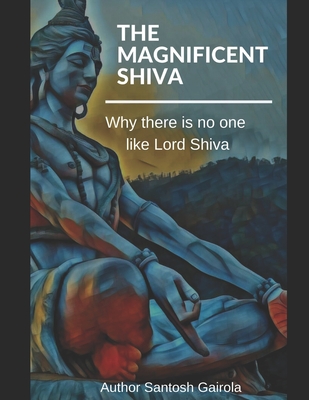 The Magnificent Shiva: Why there is no one like Lord Shiva? (Paperback)

Do you want to know why Lord Shiva is so extraordinary that there are countless devotees of Shiva all over the world?

The book Magnificent Shiva will take you on the journey from Sadashiva to Shiva. And you will come to know many aspects of Lord Shiva, which makes him one of the most loved lords.

Therefore, if you want to understand who is Lord Shiva and what is Lord Shiva's significance in Hinduism. Then this is the right book for you.

Here is a glimpse of the book about what you will read in this book.

Shiva means the one who is Nirakara (attributeless) Param Brahma (supreme consciousness).

The eternal form of Shiva is Sadashiva, which is beyond human perception. There is no end and no beginning of Lord Shiva. He is an omniscient, immortal, omnipresent, supreme transformer of the energies.

The Sanatan Trinity is incomplete without him. The great God Shiva contains both the contemporary world within him. It means all the anarchy, as well as calmness of the world, dwells in him.

Lord Shiva is the creator, preserver, and destroyer of the world. He is the Supreme Being in Shivaism.

The books express the characteristics of Lord Shiva in the form of short stories and descriptions.

The teaching of Lord Shiva is practical in today's life. Every day people can learn many things from Lord Shiva and make their lives pleasant and prosperous.

This book will describe why Lord Shiva is known as Magnificent Shiva?

Book will take you through various chapters and let you help to understand the virtues of Shiva. You will come to know why the greatest destroyer of darkness is most dear to the large section of humanity.

The book Magnificent Shiva will describe the generosity of Lord Shiva.

After reading the book, you will feel connected to Mahadev.

Om Namah Shivaya, so let's get connected to eternal blissfulness.

Lots of love to everyone.