Jock Peters, Architecture and Design: The Varieties of Modernism (Hardcover) 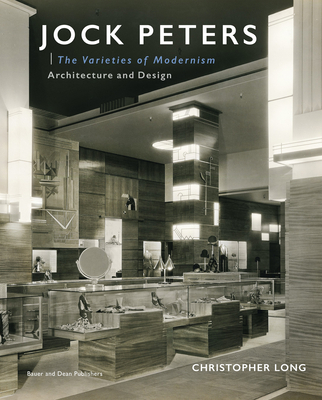 Jock Peters, Architecture and Design: The Varieties of Modernism (Hardcover)


Currently not in store. Available to order. Usually Ships in 3-7 Days
- First-ever monograph on architect and designer Jock Peters, a German-born modernist who immigrated to Los Angeles in 1922, where he gained national recognition for his elegant and lavish interiors at the iconic Bullock's Wilshire department store- This visually rich study includes never before published material from the architect's personal archive, still in family hands- A detailed story of an architect's fascinating career set within the context of architectural developments in Hamburg, Germany, in the 1910s and the early history of Los Angeles modernism in the 1920s and early 1930s- The 262 historic photographs, etchings, watercolors, drawings (including floor plans), many in color, provide design inspiration for houses, retail spaces, storefronts, furniture, packaging, textiles, and set designs- Christopher Long - author of ground-breaking studies on Kem Weber, Adolf Loos, and Paul Frankl - writes another important history to broaden our understanding of modern architecture and designScholar and historian Christopher Long turns his attention to the little-known German-born architect and designer Jock Peters (1889-1934). Long's engaging study introduces us to the modernist's architectural work in Hamburg, Germany, before World War I, and also to Peters's work created after he immigrated to America in 1922. Most notable are his interiors for the once-famous Hollander department store in New York City and for Bullock's Wilshire in Los Angeles (the building was recently restored by Southwestern Law School). Both projects brought him international recognition. Peters also designed a dynamic sales office building for the short-lived Maddux Air Lines, as well as stores and houses for the developer William Lingenbrink, a major supporter of the burgeoning modernism in Southern California. Aside from his architectural work, Peters designed film sets for Famous Players-Lasky (later Paramount Pictures), working in the famed art department of Hans Dreier. Despite his early death, Peters managed to leave his mark on the modernist landscape in Southern California at a time when the new style was just emerging.
Christopher Long is Martin S. Kermacy Centennial Professor of Architecture at the University of Texas, Austin, where he first began lecturing in 1999. Shortly after receiving his Ph.D. in history, Long taught at the Central European University in Prague (1994-1995). His research centers on modern architectural history, with a particular emphasis on Central Europe between 1880 and the present. Long has lectured worldwide and written or contributed to over fifty publications, including his numerous studies of the architecture of Adolf Loos and his seminal books on Paul Frankl and Kem Weber (both published by Yale University Press). He has collaborated on several exhibitions, advising on Living in a Modern Way: California Design 1930-1965 a traveling exhibition that originated at the Los Angeles Museum of Art (LACMA) in 2011, and I Have Seen the Future: Norman Bel Geddes Designs America at the Museum of the City of New York (2013). He co-curated Josef Frank arkitektur at the Swedish Museum of Architecture in Stockholm (1994); Josef Frank, Architect and Designer: An Alternative Vision of the Modern Home at the Bard Graduate Center for Studies in the Decorative Arts in New York City (1996); Paul T. Frankl: Ein Wiener Designer in New York und Los Angeles in Vienna and Budapest (2014); The Rise of Everyday Design: The Arts and Crafts Movement in Britain and America at the Harry Ransom Center at the University of Texas, Austin (2019); and is currently working on an exhibition with co-curators Wendy Kaplan and Monica Penick scheduled for 2024 at LACMA: Better Living Through Science: The Home of the Future, 1920-1970 .