Ever Fallen in Love: The Lost Buzzcocks Tapes (Paperback) 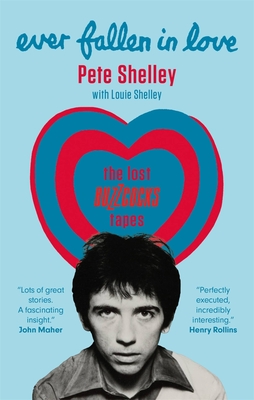 Newly discovered recordings of a music legend in his own remarkable words: punk, Buzzcocks and the inspiration behind some of greatest songs ever written.

When Pete Shelley, lead singer of legendary punk band Buzzcocks, passed away in 2018 we lost the chance to hear one of music's brightest stars tell his story.

Or so it seemed.

Now, recordings have surfaced of a series of remarkable interviews in which Pete tells the story of his life, his band and his place at the beating heart of the punk explosion in fascinating detail.

Recorded over a series of late-night calls with a close friend, the tapes hear Pete talk song-by-song through Buzzcocks releases to reveal the personal memories behind the music and the inspiration for masterpieces such as 'Ever Fallen in Love (With Someone You Shouldn't've)' and 'What Do I Get?'.

Published for the first time and with the blessing of Pete's estate, Ever Fallen In Love: The Lost Buzzcocks Tapes is a tribute to a founding member of punk and a chance to hear one of music's true visionaries tell his own story at last.

"Pete and Buzzcocks were there right from the beginning."
-BERNARD SUMNER, Joy Division, New Order

"Shot through with self-doubt and mild regret, Pete Shelley's lovesick pop classics have a bittersweet charm that will forever speak to the young romantic"
- JOHN COOPER CLARKE

"Buzzcocks were the blue touchpaper for my love of music. Pure pop met punk and the result was perfection."
- TIM BURGESS, The Charlatans

Pete Shelley was the lead singer, guitarist and songwriter of iconic punk band Buzzcocks. He wrote some of punk's most enduring songs, including 'Ever Fallen in Love (With Someone You Shouldn't've)', 'Orgasm Addict' and 'What Do I Get?', as well as solo hits such as 'Homosapien', which was subsequently banned from being played on the BBC. Regarded as one of the finest songwriters of his generation, Pete died in 2018.

Louie Shelley was a close friend of Pete Shelley's, and no relation. She first met Buzzcocks while working as a journalist on the Manchester music scene in the late 1990s, going on to work with them in various capacities in the ensuing years. She remains involved in Buzzcocks projects, as well as the Pete Shelley Memorial Campaign.