Stirring Up Sheffield: An Insider's Account of the Battle to Build the Crucible Theatre (Hardcover) 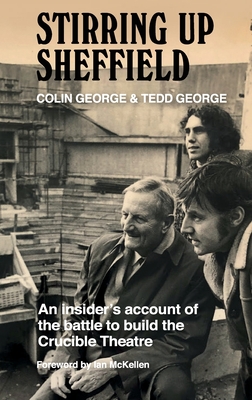 Written by the Crucible Theatre's first Artistic Director, Colin George, and his son, Tedd, 'Stirring Up Sheffield' is the extraordinary story of a group of visionaries who came together to build a revolutionary thrust stage theatre in Sheffield. With a foreword by Ian McKellen and original photography from the era, this is an insider's account of the battle to redefine the actor/audience relationship.

50 years ago, opposition to the Crucible came in thick and fast. The Star newspaper urged its readers to join the debate and published articles that derided the new building quoting Sir Laurence Olivier, Sir John Clements and Sir Bernard Mills, who referred to the stage as 'a kind of freak that would be out of date in seven years' time'. But the theatre proved them all wrong and galvanised a new generation of Britain's actors, directors, designers and playwrights who recognised the thrust stage and its theatrical potential.

"This is an adventure book. It's the story of how, against the odds, a new theatre was designed and built in Sheffield, where it is now, fifty years on, established as the city's glory.' - Ian McKellen.