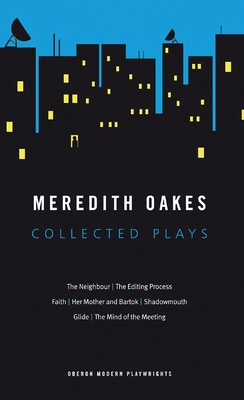 Includes the plays The Neighbour, The Editing, Faith, Her Mother and Bartok, Shadowmouth, Glide and The Mind of the Meeting

Two highly regarded early plays, The Neighbour and The Editing Process (here presented in a revised version) present a study in contrasts: the first a battle of wills between two young men on a housing estate; the second an urbane but despairing comedy set in a publisher's offices.
Faith provides a vision of military conflict as a testing ground for English values, while Her Mother and Bartok focuses on a husband and wife as they discuss their first meeting from the perspective of the less-than-inspiring present. In Shadowmouth a troubled teenager is thrown out by his single mother and is taken in by a middle-aged single man. Glide and The Mind of the Meeting are short radio plays.

Meredith Oakes, who has lived in London since 1970, has written plays, adaptations, translations, opera texts and poems, as well as dramatic works for television and radio. She taught play-writing at Royal Holloway College and for the Arvon Foundation, and wrote music criticism for The Independent in London and The Daily Telegraph in Sydney, and is a regular contributor to magazines including The Listener.