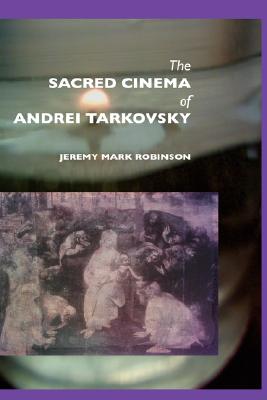 
Currently not in store. Available to order. Usually Ships in 3-7 Days
THE SACRED CINEMA OF ANDREI TARKOVSKY

This is an important addition to film studies, the most painstaking study of Andrei Tarkovsky's work available.

Contains 150 illustrations, of Tarkovsky's films, Tarkovsky at work, his contemporaries, and his favourite painters.

Andrei Tarkovsky is one of the most fascinating of filmmakers. He is supremely romantic, an old-fashioned, traditional artist - at home in the company Leonardo da Vinci, Pieter Brueghel, Aleksandr Pushkin, Fyodor Dostoievsky and Byzantine icon painters. Tarkovsky is a magician, no question, but argues for demystification (even while films celebrate mystery). His films are full of magical events, dreams, memory sequences, multiple viewpoints, multiple time zones and bizarre occurrences.

As genre films, Andrei Tarkovsky's movies are some of the most accomplished in cinema. As science fiction films, Stalker and Solaris have no superiors, and very few peers. Only the greatest sci-fi films can match them: Metropolis, King Kong, Close Encounters of the Third Kind and 2001: A Space Odyssey. Tarkovsky happily and methodically rewrote the rules of the sci-fi genre: Stalker and Solaris are definitely not routine genre outings. They don't have the monsters, the aliens, the visual effects, the battles, the laser guns, the stunts and action set-pieces of regular science fiction movies.

No one could deny that Andrei Roublyov is one of the greatest historical films to explore the Middle Ages, up there with The Seventh Seal, El Cid, The Navigator and Pier Paolo Pasolini's 'Life' trilogy. If you judge Andrei Roublyov in terms of historical accuracy, epic spectacle, serious themes, or cinematic poetry, it comes out at the top. Finally, in the religious film genre, The Sacrifice and Nostalghia are among the finest in cinema, the equals of the best of Ingmar Bergman, Luis Bunuel, Robert Bresson and Carl-Theodor Dreyer.