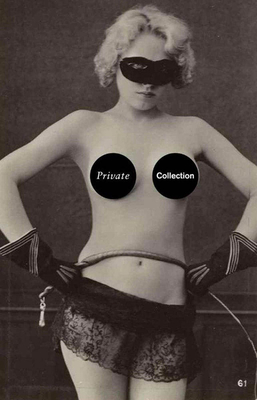 Vintage pornographic photography from the collection of Danny Moynihan

Private Collection is a unique and fascinating publication of over 250 pornographic photographs from Danny Moynihan's personal collection, including images made by some of the earliest erotic photographers, right up to the 1940s. This publication visually documents attitudes about sex and pornography, and by so doing shows how they were developed alongside a 'correct' social and cultural behavioural code of restraint, particularly with regard to sexual intercourse and role-play. By providing a historical overview of nudity and sex in photography, the book offers an intriguing insight into the way pornography was made alongside the development of photography. Private Collection includes an extremely readable and informative essay by Cressida Connolly which discusses pornography from an historical perspective, the way the sex industry was used in the 19th century, and how this affected the production, function and availability of pornography: There were no rules. It is the revolutionary newness of these images which makes them as exciting as their subjects.

Born in London in 1959, Danny Moynihan is a painter and writer. He went to the Slade School of Art, London in 1977. In 1981 he opened the Space Gallery with Paul Kasmin and furniture designer Jasper Morrison. Moynihan moved to New York in 1983 where he worked at the Robert Miller Gallery. On his return to London he took up painting again and had several exhibitions in Los Angeles and London. He has curated numerous shows, most notably 'Psycho' at Anne Faggionato, London, 'Artist and Photography' at Karsten Schubert Gallery, London, and 'Between a Rock and Hard Place' at Rove Gallery, London, and is also a founding member of Photo London. Moynihan's book, 'Boogie Woogie', for which he also wrote the screenplay, is currently in production starring Gillian Anderson, Charlotte Rampling and Heather Graham. His book 'Bait' is being published in 2008.