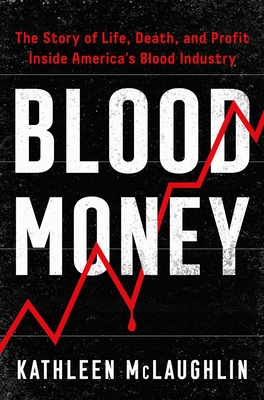 
Coming Soon - Available for Pre-Order Now
A “haunting” (Anne Helen Petersen, author of Can’t Even) and deeply personal investigation of an underground for-profit medical industry and the American underclass it drains for blood and profit.

Journalist Kathleen McLaughlin knew she’d found a treatment that worked on her rare autoimmune disorder. She had no idea it had been drawn from the veins of America’s most vulnerable.

So begins McLaughlin’s ten-year investigation researching and reporting on the $20-billion-a year business she found at the other end of her medication, revealing an industry that targets America’s most economically vulnerable for immense profit.

Assigned to work in China, McLaughlin hesitated to utilize that country’s scandal-plagued plasma supply—outbreaks throughout the 1990s and early 2000s struck thousands with blood-borne diseases as impoverished areas of the country were milked for blood with reckless abandon. Instead, McLaughlin becomes her own runner, hiding American plasma in her luggage during trips from the United States to China. She finishes the job, but never could get the plasma story out of her head. Suspicions become certainties when a source from the past, a visiting Chinese researcher, warns McLaughlin of troubling echoes between America’s domestic plasma supply chain and the one she’d seen spin out into chaos in China.

Blood Money shares McLaughlin’s decade-long mission to learn the full story of where her medicine comes from. She travels the United States in search of the truth about human blood plasma and learns that twenty million Americans each year sell their plasma for profit—a human-derived commodity extracted inside our borders to be processed and packaged for retail across the globe. She investigates the thin evidence pharmaceutical companies have used to push plasma as a wonder drug for everything from COVID-19 to wrinkled skin. And she unearths an American economic crisis hidden in plain sight: single mothers, college students, laid-off Rust Belt auto workers, and a booming blood market at America’s southern border, where collection agencies target Mexican citizens willing to cross over and sell their plasma for substandard pay.

McLaughlin’s findings push her to ask difficult questions about her own complicity in this wheel of exploitation, as both a patient in need and a customer who stands to benefit from the suffering of others. Blood Money weaves together McLaughlin’s personal battle to overcome illness as a working American with an electrifying exposé of capitalism run amok in a searing portrait that shows what happens when big business is allowed to feed unchecked on those least empowered to fight back.
Kathleen McLaughlin is an award-winning journalist who reports and writes about the consequences of economic inequality around the world. A frequent contributor to The Washington Post and The Guardian, McLaughlin’s reporting has also appeared in The New York Times, BuzzFeed, The Atlantic, The Economist, NPR, and more. She is a former Knight Science Journalism fellow at MIT and has won multiple awards for her reporting on labor in China. Blood Money is her first book.
"A disturbing, painful story that smoothly combines the personal and the universal." —Kirkus (starred review)

“McLaughlin — by all means a modern-day Barbara Ehrenreich — plunges into the world of blood plasma donation to weave together a vampiric real-life story of modern-day greed." —Leah Sottile, host of Bundyville and author of When the Moon Turns to Blood

"Blending memoir and reportage, journalist McLaughlin debuts with a disturbing look at the predatory nature of the blood plasma industry. A captivating and anguished exposé." —Publishers Weekly

"Vampires walk among us, and Kathleen McLaughlin is unafraid to shine a torchlight on their sins. She illuminates the ways for-profit blood plasma firms feed on the most vulnerable—the poor, the forgotten, the oppressed—in the name of big medicine, big tech, and big business, squeezing literal blood money out of those who have already given too much."." —Kim Kelly, author of Fight Like Hell

"From AIDS-ravaged villages in China to mall plasma centers in the United States, Kathleen McLaughlin traces the veins of a worldwide blood industry that draws from the desperate and needy to create life-saving products. This sharp and compassionate book will make you see globalization, and healthcare, in a whole new light." —James Palmer, author of The Death of Mao and The Bloody White Baron