The Last Leonardo: The Secret Lives of the World's Most Expensive Painting (Hardcover) 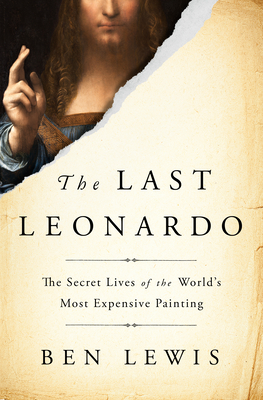 An epic quest exposes hidden truths about Leonardo da Vinci’s Salvator Mundi, the recently discovered masterpiece that sold for $450 million—and might not be the real thing.

In 2017, Leonardo da Vinci’s small oil painting the Salvator Mundi was sold at auction. In the words of its discoverer, the image of Christ as savior of the world is “the rarest thing on the planet.” Its $450 million sale price also makes it the world’s most expensive painting.

For two centuries, art dealers had searched in vain for the Holy Grail of art history: a portrait of Christ as the Salvator Mundi by Leonardo da Vinci. Many similar paintings of greatly varying quality had been executed by Leonardo’s assistants in the early sixteenth century. But where was the original by the master himself? In November 2017, Christie’s auction house announced they had it. But did they?

The Last Leonardo tells a thrilling tale of a spellbinding icon invested with the power to make or break the reputations of scholars, billionaires, kings, and sheikhs. Ben Lewis takes us to Leonardo’s studio in Renaissance Italy; to the court of Charles I and the English Civil War; to Amsterdam, Moscow, and New Orleans; to the galleries, salerooms, and restorer’s workshop as the painting slowly, painstakingly emerged from obscurity. The vicissitudes of the highly secretive art market are charted across six centuries. It is a twisting tale of geniuses and oligarchs, double-crossings and disappearances, in which we’re never quite certain what to believe. Above all, it is an adventure story about the search for lost treasure, and a quest for the truth.

Praise for The Last Leonardo

“The story of the world’s most expensive painting is narrated with great gusto and formidably researched detail in Ben Lewis’s book. . . . Lewis’s probings of the Salvator’s backstory raise questions about its historical status and visibility, and these lead in turn to the fundamental question of whether the painting is really an autograph work by Leonardo.”—Charles Nicholl, The Guardian

“As the art historian and critic Ben Lewis shows in his forensically detailed and gripping investigation into the history, discovery and sales of the painting, establishing the truth is like nailing down jelly.”— Michael Prodger, The Sunday Times

Ben Lewis is an art critic, author, documentary filmmaker, and visiting fellow at the Warburg Institute in London. He has written widely about art and culture for the international press, including The Times, The Telegraph, London Evening Standard, The Observer, Prospect, Libération, and Die Welt. His award-winning documentary films include The Beatles, Hippies and Hells Angels: Inside the Crazy World of Apple; Google and the World Brain; Poor Us: An Animated History of Poverty; The Great Contemporary Art Bubble; Art Safari; and Constantin Brancusi: The Monk of Modernism. Lewis has an MA in history and art history from Trinity College/Cambridge University, and he also studied at the Freie Universität in Berlin.

“A richly detailed mystery . . . As Lewis chronicles the quest to attribute the painting to [Leonardo] da Vinci, he uncovers an astoundingly dysfunctional world of museums, galleries, auction houses, collectors—a Russian oligarch and a Saudi prince among them—and unscrupulous middlemen, a world plagued by mistrust, suspicion, and the irresistible lure of financial rewards. Art, greed, and stealth make for a lively tale of intrigue.”—Kirkus Reviews

“As the art historian and critic Ben Lewis shows in his forensically detailed and gripping investigation into the history, discovery and sales of the painting, establishing the truth is like nailing down jelly.”— Michael Prodger, The Sunday Times