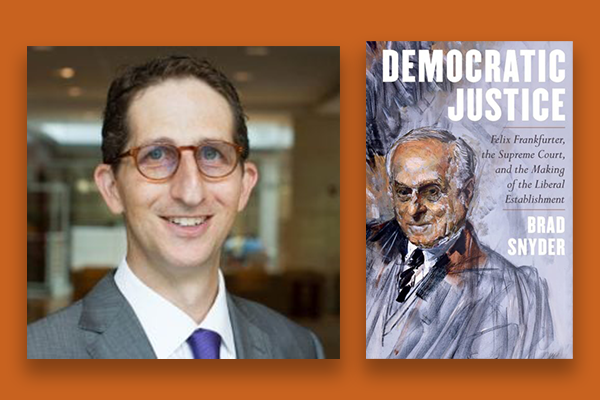 Sponsored by the Falmouth Jewish Congregation

Brad Snyder’s Demo­c­ra­t­ic Jus­tice is the defin­i­tive biog­ra­phy of Felix Frank­furter, Supreme Court jus­tice and cham­pi­on of twen­ti­eth-cen­tu­ry Amer­i­can lib­er­al democ­ra­cy. The conventional wisdom about Frankfurter—Harvard law professor and Supreme Court justice—is that he struggled to fill the seat once held by Oliver Wendell Holmes. Scholars have portrayed Frankfurter as a judicial failure, a liberal lawyer turned conservative justice, and the Warren Court’s principal villain. And yet none of these characterizations rings true. Laura Kalman (UC Santa Barbara) describes Democratic Justice as a “spellbinding biography (that) brilliantly revises this understanding to present Frankfurter as a champion of democracy in his day―and for our own as well.” A pro-government, pro-civil rights liberal who rejected shifting political labels, Frankfurter advocated for judicial restraint—he believed that people should seek change not from the courts but through the democratic political process. Indeed, he knew American presidents from Theodore Roosevelt to Lyndon Johnson, advised Franklin Roosevelt, and inspired his students and law clerks to enter government service.

Frankfurter, an Austrian-Jewish immigrant, arrived in the United States at age eleven not able to speak a word of English. By age twenty-six, he had befriended former president Theodore Roosevelt, and by age fifty was one of Franklin D. Roosevelt’s most trusted advisers. He became the third Jewish U.S. Supreme Court justice and a leading Zionist. As a justice, he hired the first African American law clerk and helped the Court achieve unanimity in outlawing racially segregated schools in “Brown v. Board of Education.” He fought for a Jewish state at the 1919 Paris Peace Conference, saved his uncle from a Nazi prison in Vienna after the Anschluss, and he and his allies persuaded Harry Truman to be the first world leader to recognize the State of Israel.

Brad Snyder is a professor of constitutional law and twentieth-century American legal history at Georgetown University Law Center. In additional to his legal scholarship, he has written for Politico, Slate, and the Washington Post.

You can participate in the program on Zoom and view it on FCTV, which will carry it live on FCTV Public Channel 13 in Falmouth and livestream it on their website.

Those who join on Zoom will have an opportunity to pose questions.

Books are available from Eight Cousins and can be purchased in person, by phone or online below.

Democratic Justice: Felix Frankfurter, the Supreme Court, and the Making of the Liberal Establishment (Hardcover)

The House of Truth: A Washington Political Salon and the Foundations of American Liberalism (Hardcover)