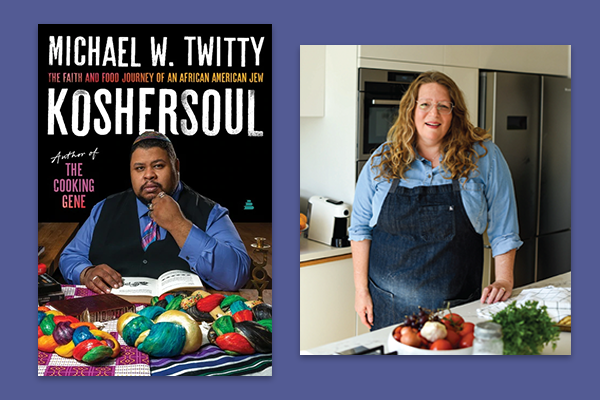 Sponsored by the Falmouth Jewish Congregation

Join the Falmouth Jewish Congregation for this virtual Jewish Book Council event. This is a talk not to be missed, and it is not just for foodies. It is about history, shared and diverse legacies, holding multiple identities in contemporary America, about culinary justice and much more.

Twitty describes his latest book this way: “I wanted ‘Koshersoul’ to be a love letter to being Black and Jewish in the state that we’re in this country in this moment,” he said. “This book is like challah: a weaving of food memoir, recipes, personal essays, human vulnerability and about the long story of the intersection of Black and Jewish history and culture. This is not an academic journey, and it’s purposely not a cookbook. It’s an eclectic recipe file of diverse and complex peoplehood.”

From The Forward: For...Michael Twitty, African and Jewish diaspora cuisines share a crucial bond. Twitty’s first book, which reconstructed Southern cuisine as prepared by enslaved African American cooks, won the James Beard Award. His second, called “Koshersoul” and out this week, tackles another part of his identity: his Judaism. It features recipes for yam kugel, black-eyed pea hummus and kosher-Cajun rice dressing. The goal, he writes, is “to remove all the labels, not create another one.”

The James Beard award-winning author of the acclaimed The Cooking Gene explores the cultural crossroads of Jewish and African diaspora cuisine and issues of memory, identity, and food.

In Koshersoul, Michael W. Twitty considers the marriage of two of the most distinctive culinary cultures in the world today: the foods and traditions of the African Atlantic and the global Jewish diaspora. To Twitty, the creation of African-Jewish cooking is a conversation of migrations and a dialogue of diasporas offering a rich background for inventive recipes and the people who create them.

The question that most intrigues him is not just who makes the food, but how the food makes the people. Jews of Color are not outliers, Twitty contends, but significant and meaningful cultural creators in both Black and Jewish civilizations. Koshersoul also explores how food has shaped the journeys of numerous cooks, including Twitty’s own passage to and within Judaism.

As intimate, thought-provoking, and profound as The Cooking Gene, this remarkable book teases the senses as it offers sustenance for the soul.

Michael W. Twitty is the author of The Cooking Gene, winner of the James Beard Foundation Book of the Year Award. He is a highly sought after speaker and consultant at food events (Colonial Williamsburg) and festivals, and a member of two Jewish speaker’s bureaus. He has appeared on programs with Andrew Zimmern (Bizarre Foods America), Henry Louis Gates (Many Rivers to Cross), Padma Lakshmi (Taste the Nation) and most recently on Michelle Obama's Waffles and Mochi. He is a TED Fellow and was just named as a National Geographic Emerging Explorer. Michael has also filmed his first MasterClass course which is slated to premiere in November 2021. In 2020, Michael was on The Forward's 2020 list of influential American Jews. Over the past year he has partnered with Atlas Obscura to teach multiple online seminars and was the first guest on a new web series for their food division, Gastro Obscura. Michael will also be a Consulting Producer on both a new food competition program coming soon from OWN, and Carla Hall’s new Foodways show. His line of personal spice blends with the boutique supplier Spice Tribe regularly sells out. Michael lives in Fredericksburg, Virginia.

Adeena Sussman is a recipe developer, food stylist and the co-author of nine cookbooks (with several more in the works). She is also the founder of Crispianity, a column of original recipes and musings on crispy and crunchy food, on foodrepublic.com. Raised in Northern California, she divides her time between New York and Tel Aviv, where love of tahini is practically a prerequisite for residency. She is currently working on a cookbook about Israeli cuisine and several new collaborative projects.

Books are available to purchase online or in-store at Eight Cousins.

Koshersoul: The Faith and Food Journey of an African American Jew (Hardcover)

The Cooking Gene: A Journey Through African American Culinary History in the Old South (Hardcover)