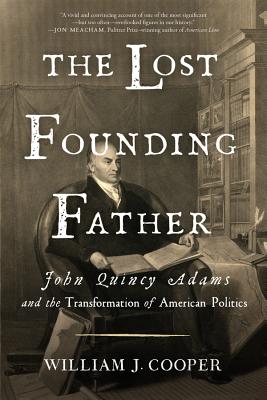 He was overshadowed by his brilliant father, humiliated in office after the contested election of 1824, viciously assailed by populist opponents for being slippery and effete, and then resoundingly defeated by the western war hero Andrew Jackson in the 1828 election which ushered in an era of unparalleled expansion. John Quincy Adams has never basked in the historical spotlight—until now. In fact, award-winning historian William J. Cooper considers him to be our lost Founding Father. America needed his morality and political vision to guide the nation in the tumultuous years ahead. He was the final link to the other founding visionaries. Adams recovered from defeat, became a Massachusetts congressman, and passionately took up the antislavery cause.  Despite raucous opposition from southern and northern politicians, he refused to relent.  His protests were so vehement that Congress enacted the gag rule in the 1830s specifically to silence him, but that didn’t work either.  His heroic arguments in the 1841 Amistad trial have been memorialized; he stood strong against the expansion of slavery that would eventually send the nation hurtling into war until his death in 1848, which produced an outpouring of national, and bipartisan, grief never seen before.